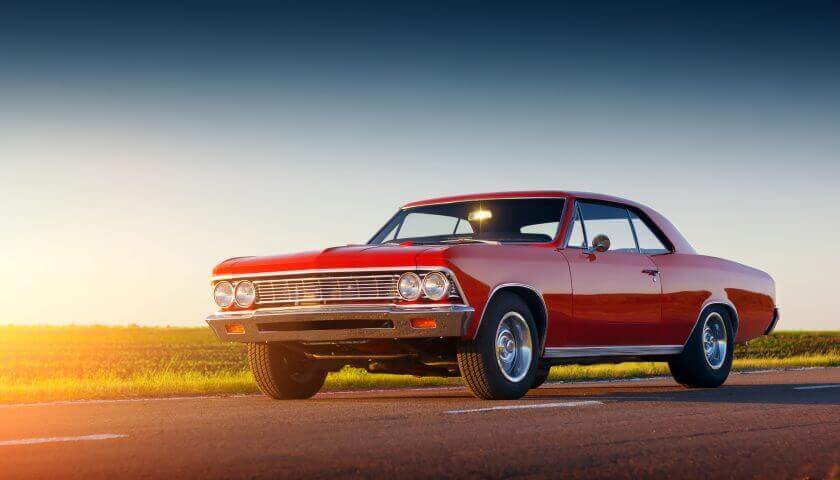 The muscle car is an American tradition. Packing huge engines in standard cars is a way of offering high performance at a low cost. The middle of the 20th century was the peak of the muscle car era but they are still around. Here are the seven most iconic muscle cars to have graced the hardtop.

In 1970, Chrysler teamed up with the aftermarket performance company Hurst to create the ultimate muscled up 300. The monster that these two companies came up with was somewhere between a luxury vehicle and a muscle car. It was marketed towards business executives with lots of cash to splash and has been described by Hot cars as “A yuppie car … created before yuppies were invented“. The 300 Hurst had an impressive 375 horsepower created by a large V8 engine typical of 1970s American muscle cars. The 300 is one of the least famous of the cars on this list, but it still has a loyal following of piston heads – including New Canaan resident Mike Savage.

Packing an absurd 7.0-liter engine, the 1964 Ford Fairlane Thunderbolt was a street-legal racer that made every speed demon in America salivate onto their patent leather jackets. A stripped-out version of the car won the National Hot Rod Association’s Super Stock Championship the year it was released. Producing 600 bhp, this car was almost certainly too much to handle on many small roads. Although the car was technically street legal, Ford attached a disclaimer under the hood letting potential drivers know that the car was not really up to road safety standards. Only 100 of these beasts were produced in 1964 before going off the market. Today they are considered to be real collector’s items. Noise enthusiasts will be pleased to find out that all sound dampening equipment was removed from the car in order to save weight.

In the 1960s and 70s, there was a rule in NASCAR that stipulated that any competing car also had to be available to the public in limited numbers. This was a rule designed to ensure that the racers would be ‘stock’, and has since been abandoned. While this rule was in place, however, it led to the public release of some absolutely absurd vehicles. One such car was the 1970 Plymouth Superbird. The Superbird is notable for its massive rear wing and highly angular duckbill nose. These features were designed to make the car a better NASCAR circuit racer but found favor with particularly extravagant street racers. The unusual shape of the Superbird meant that some vehicles went unsold for years when it was released. Today, however, it is rightly appreciated as one of the most beautiful examples of supercar design. Expect to pay a 6 figure sum for a drivable example at auction.

The 1964 Pontiac GTO was the vehicle that truly kicked off the muscle car era. It was a modified version of the disappointing Pontiac Tempest. The name was chosen carefully in order to indicate racing pedigree – GTO was a name often used by the Italian performance car manufacturer Ferrari. Pontic stuffed a huge engine into the car and offered it for a price that was well below the amount asked for by the big European sports car manufacturers. Finally, a somewhat ordinary person could own a performance vehicle. It was rough, ready, ugly, and loud – and that suited people just fine. A huge amount of hype surrounded the release of the GTO. So much hype, in fact, that Car and Driver Magazine even compared the new hot rod to its Italian namesake in a rather fantastical cover story. It could go from 0 to 60 in around 6.9 seconds. This was a huge leap in performance over the Tempest and meant that street racers could hit some serious speed.

While the Pontiac GTO kicked off the muscle car craze of the 1960s and 70s, the Oldsmobile Rocket 88 started a similar – although slightly smaller – buzz in the 1950s. The Oldsmobile 88 was a fairly unremarkable car, but the addition of a V8 engine destined for larger vehicles was what set the ‘Rocket’ model apart from the crowd. This started a tradition of American car manufacturers fitting oversized engines onto their vehicles to create special edition drag racers. The end of the 1940s saw the dawn of the teenager as a distinct age group in the United States. Teenagers took part in countercultural activities – one of which happened to be street racing. The Rocket 88 was released at the right time in history for it to become an icon of a new age.

The Ford Mustang is considered to be one of the all-time great muscle car lines, but it was not exactly hot property in 1965 before the release of the GT350 Shelby. Legendary car tuner Carroll Shelby fitted all manner of performance devices to a 1965 fastback Ford, transforming it into a true performance machine. Shelby Mustangs are now considered to be some of the most sought-after muscle cars by enthusiasts. They have the timeless aesthetic of a 60s Mustang and the incredible performance of a machine that has been tinkered with by one of the best to ever crank a spanner. Car and Driver magazine deemed the project an immediate success but warned that it would not appeal to mass-market buyers more interested in how a car looked than performance.

The 1970 Chevrolet Chevelle was one of the fastest accelerating road cars on the market at the time of its release. Able to reach 60 mph in around 5 seconds, the car could out drag almost anything else on the roads. Perfect for hot-headed street racing types burning leather on desert backroads in the Southern States. The Chevelle also had great looks, which cannot have been a small factor in its success.

How to Become a Sports or Fitness Model in Australia

4 Things That Will Make Your Move Easier

Seat Covers: A crucial part of any vehicle

How Much Does A Windshield Cost To Replace

How Much Does A Windshield Cost To...

Seat Covers: A crucial part of any...